Arianne is introduced to new girl on the roster, Harley. She is a beautiful girl next door with her curly brown hair, great body, and nice thick muscular legs. Harley has no previous wrestling experience, and is going into this with no knowledge at all. Arianne was supposed to take it easy on Harley and let her become adapt to performing moves, and getting submissions. Arianne steps onto the mats dressed in her neon green underwear while Harley wore he camouflage shorts and sports bra. As they line up ready to go, Arianne totally catches Harley off guard as she is slammed to the mats instantly.  Harley has no time to react as Arianne jumped up fast on top of her and lands a facesit. As Harley struggles beneath Arianne, she taps out rather quick, as she has never been facesat before. Arianne continued sitting on her face and said to her ” you think you can come all up in here and be new” “well fuck you bitch” and slams down again on her face. Harley struggles and bucks but Arianne is skilled with facesitting and stays on top. She then says “that’s what you get for being new” and watches Harley fight beneath her. Harley tries to fight harder and Arianne just laughs at her futile  escape attempts. With each tap you can hear Harley trying to get as much air as she could before Arianne facesits her again. This was sheer facesitting punishment for a newbie that we have never witnessed before. As the match goes on, Harley’s face stays buried in Arianne’s pussy as you can see her nose disappear right into it. Arianne’s pussy lips can be seen draped over Harley’s mouth and nose as she can no longer breathe. Arianne then switches to full weight, spreading her legs wide, lowering herself down onto Harley’s face saying to her ” here’s my full weight now”. Harley’s frustrations grew stronger as she was still fighting hard to break free calling Arianne a bitch. Then Arianne fires back saying “your the bitch, BITCH” slamming down again on Harley’s face. This facesitting was practically non stop, Arianne not giving Harley much time to get air, nor recover. she shakes her ass and pussy all over Harley’s face now saying “get some of this” further humiliating Harley. Arianne was so cocky and arrogant towards Harley as she literally was destroying this newbie. She gave Harley a taste of her reverse straight leg scissors, digging in deep, flexing and pulling Harley’s face nearly into her ass. Harley grew desperate as she did not know what to do, nor how to escape this punishment.  Arianne sat up in a reverse schoolgirl pin driving Harley’s chin into her ass, then lifts up and uses a reverse facesit now. Harley was overwhelmed with the amount of facesitting she had to endure. Arianne then twerks all over her face, shaking her ass and facesitting Harley. Arianne then said “do you like my ass in your face”, Harley’s comeback was rather shocking with her saying ” yeah I will dream about this tonight”. Harley grabs two handfuls of Arianne’s ass cheeks trying to pull her off her face, but she just could not do it. Arianne still was verbally bashing and insulting Harley. Turning back into forward, Arianne says to her ” get some of this in your face”, ramming her pussy back down shaking and rubbing it all over her face. Harley’s cries were muffled under Arianne, and she did not seem to even care. The smothering continues as Arianne is relentless sometimes just barely giving Harley a breath when she tapped. Then Arianne reaches back grabbing Harley’s legs and put her into a matchbook facesit pin. At one point Harley even laughs at Arianne calling her a bitch. So Arianne retorts saying ” yeah well we will see how funny it is when you can’t breathe”. As the match draws closer to the end, Harley was winded and massively exhausted. Arianne grabs her by the hair and pulls her face even tighter into her pussy to smother her. As the match draws near the end, Arianne was facesitting Harley and yells out, “do you quit?” Harley just flips her off unable to say anything. After a few more taps, Harley finally says “ok, ok” in a very winded weak voice. That was not the answer Arianne was looking for and stares down at Harley and says ” ok, what bitch”. Then Arianne jumps back on her face. Harley taps again, but says nothing so Arianne facesits her again. With a very quick tap, Harley says “ok, ok I quit”. Still not satisfied Arianne says “naw, one more” then jumps back onto her face one last time. Arianne then boasts by saying” look at this, Arianne rules bitch”, then says” your too weak to fight me”. Sitting on Harley’s mouth she looks up and flexes her muscles, posing ever so arrogantly for the camera over her beaten opponent. Will Harley return to the mats? Will she be seeking revenge for this? Watch for other releases to find out!! This is one clip you don’t want to pass up on!! 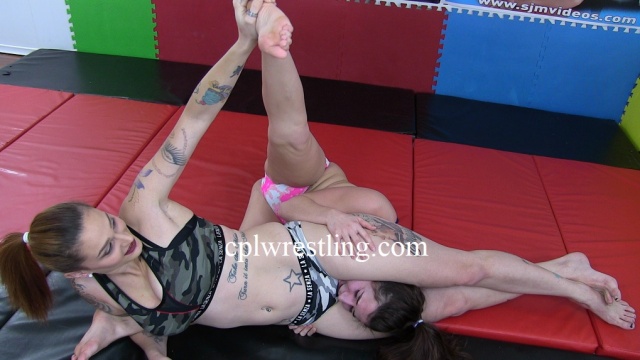 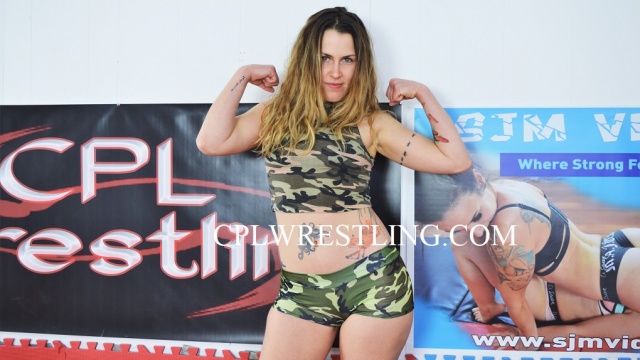 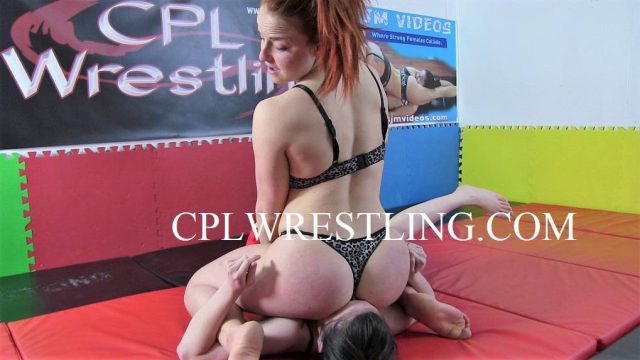 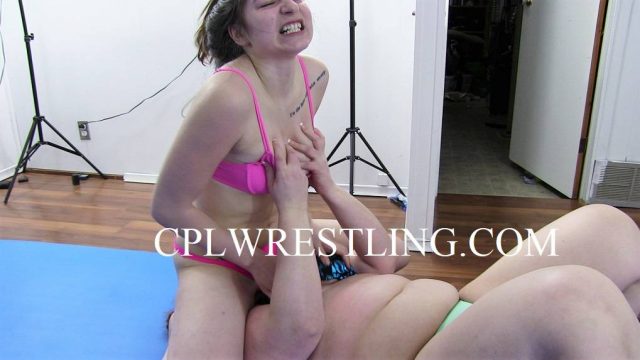 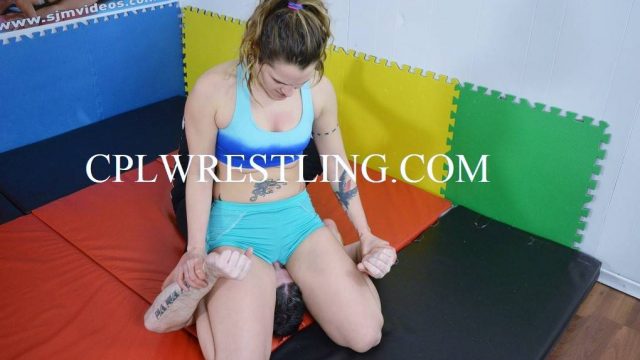